Margaret Thatcher, Blackmail and ‘Only 6%?!’ 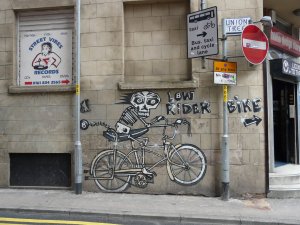 That’s the range of topics you get when you mix conservatives, lefties, a bunch of eco-hippies in debate on public transport!!! I recently attended the lively public meeting in question which was arranged by Manchester’s Climate Forum to discuss the Transport Innovation Fund’s bid to invest 3 billion into Manchester’s public transport whilst ALSO introducing a ‘congestion charge’. It was actually interesting as the panellist represented a genuinely wide range of views and opinions about whether the bid should be accepted and if so, with what qualifications.

Toby Sproll (of United City represented local businesses) kicked off the debate stated that the TIF bid made perfect business sense as the investment into public transport would improve local economy by increasing the efficiency of transport networks.

The congestion charges, he assured, were effective and fairly targeted at peak time traffic (travelling in the morning and leaving the city centre in the evening). Dave Coleman (Clean Air Now) backed Toby adding that congestion charges were an effective way to secure badly needed investment in public transport which would tackle climate change.

The effectiveness of the scheme in tackling climate change was challenged however when a member of the audience highlighted that even with the introduction of congestion charges CO2 levels in Manchester are predicted to fall by only 6%. Is that really enough? 6%? Clearly, it’s better than an increase but 6% is an abysmal change for the investment of 3 BILLION quid.

Roy Wilkes who represented the Campaign for Free Public Transport, urged that this 3 billion be invested in free public transport instead as a more radical measure to combat the real and catastrophic threat of climate change. Public transport, he declared, was still too expensive which was why it still didn’t compete with cars which were simply being entrenched as a transport mode by the congestion charge.

Questions of whether such radical measure could be done were met with cries from the audience to ‘Nationalise! Nationalise!’ and suggestions of buying back what Margaret Thatcher had sold and running public transport for less or free.

Despite the heated debate, many agreed on the need to improve the bid, making it more transparent and focus more on environmental issues by improving walking and cycling facilities. There were also suggestions of an independent body to monitor the bid and also ensure that money from the congestion charges were invested straight back into Manchester.

Personally, I think that investing into public transport is so vital to reduce the number of cars on the road and to help make public travel a more viable option. However I do think that the 3 billion would go so much further and combat climate change more effectively if the investments were going to public-owned services rather than private companies. This would not only help keep the price of public transport down but would also make the possibility of free public transport realistic in the mid-to-long term future. And that can’t be a bad thing!

This entry was posted in climate change, Congestion Charge, Manchester. Bookmark the permalink.