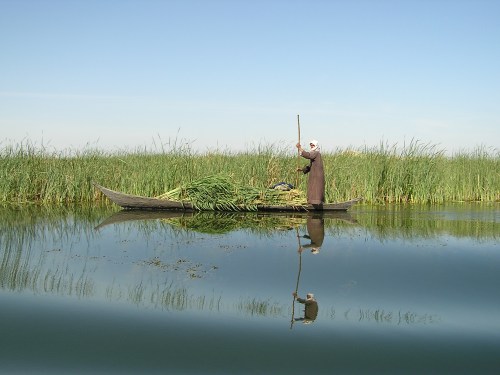 You don’t often get a chance to talk about Iraq and success in the same sentence so I was very happy when I stumbled across the story of Iraq’s Marshlands and the organisation working hard to restore the vital wetland.

I’ll hand it to you the story doesn’t start well. Back in the late 1970s and early 1980’s, the Marshlands of Iraq- which was the largest wetland ecosystem in the Middle East- became a haven for people who resisted Saddam and many of the Marsh Arabs who lived there also rebelled against Saddam.

In response to this,  Saddam began diverting water away from the marshlands in the 1980s effectively draining away the wetlands which were transformed in a couple of short years into dry desert. This was punishment for their rebellion. The marshlands, which originally supported around a quarter of a million people, shrunk to just 10% of its original size and was described as an “ecological and human disaster” by the UN.  An estimated 70,000 people left for camps in Iran, plants died, birds flew away and ecosystem was on the brink of extinction.

Fast forward to post-Saddam Iraq and the vision of one person, Azzam Alwash, to restore the marshland of his childhood memories and you see a very different Marshland. Here’s what I wrote for the article at Green Prophet:

Water which was diverted away from the Iraqi Marshlands under Saddam were re-routed to the marshlands which has seen the return of reeds on the embankments, bird-life and fishes. Birds such as the pied Kingfisher, the great white Pelican, the Basra Reed Warbler and the Greater Flamingo can now been seen flying across the marshlands.

The restoration has also encouraged the return of Marsh Arabs to the wetlands who are now able to eke out a living from the Marshlands through fishing and making baskets out of reeds to sell in the markets.

This is not to say that the project hasn’t faced any problems. Much of the restoration has been patchy and issues such as falling levels of water and the deteriorating quality of water have hindered a complete restoration. It also means that many Marsh Arabs are still struggling to get back to the living they had before the marshes were drained during the Saddam era.

Those involved in the restoration admit that there is still a long way to go but also point to the current progress as a sign that the Iraqi Marshlands could one day be fully restored to its former glory.

One response to “Saddam, War and Water: Restoring Iraq’s Marshlands”